Are You Competitive With Other Writers?

Writers, for centuries, have socialized with other writers. In salons, in retreats, artist colonies, as penpals, personal friends, friendly rivals, actual rivals. There is something about this writing life that draws like to like, so even though we tend to imagine writers as garret-dwelling loners, they actually do clump up together all the time. Maybe because no one else understands this particular brand of crazy. Maybe because they want to compare notes, not only to learn from their comrades but also to see how they measure up.

Our "Book Pregnant" group consists of 30 debut authors. As we've been going through this process together, sharing our news and asking questions and learning about the experiences the others are having, I've realized that besides the obvious (money) there are a multitude of comparison points authors can use to measure each other. Here are a few:

With all of these ways that writers can one-up each other, all of the feelings that can potentially be hurt, and all the ways you can feel rotten about yourself by bathing in everyone else's success, you would think that our little group would be just a tiny bit fraught. That there would be a little bit of "Well, you may have gotten that profile, but I got that interview," or at the very least, "Damn, I wish I had that kind of print run." But I'm telling you, honestly, it's not like that. Not only is this group not like that, but I've been friends with other writers for most of my life, and while some of my friends have been insanely successful and others of us have not, I have seen my friends helping each other, helping me, supporting each other, cheering each other on, commiserating without eye-rolling, encouraging without comparing. It's really amazing.

Why is this happening?

One idea is that writers have so many obstacles to overcome, so many external threats and potential "enemies," that it doesn't pay to attack each other from within the team. There are unimpressed reviewers, Goodreads users that give you one star with no explanation, Amazon coders that somehow leave your best info off your page, bookstore patrons that don't show up for readings in the rain, etc. Who needs to worry about other writers' snubs or sabotage?

Another thought is that writers really do need each other to succeed -- for introductions, for advice, for recommendations, for instruction -- so once one has been helped, one is likely to turn around and help others. But what I've been thinking about lately is that possibly now in this online world of social media, where you need Likes and Retweets and Pinnings and Follows... you really can't survive on your own. Even if you're a loner, a tortured artist living in a cave, with no social skills and no deodorant, you better learn how to craft a cool status update, because your publisher is looking at your fan page, and you better have some engaged readers.

#amwriting was begun by Johanna Harness two years ago. It's an abbreviation of "I am writing" and its purpose is to connect writers to other writers around the world. You can read more about it here, or just jump on Twitter and search #amwriting to get a taste. #mywana is a tag that was launched by writer Kristen Lamb based on her book for writers, We Are Not Alone. She calls it the Love Revolution and you can read more about it here. I asked these two networking experts some questions about competition between writers and how the internet has changed the way writers interact.

1. What inspired you to promote this hashtag? Was it seeing existing friendliness and collaboration between writers or was it seeing a dearth of it? 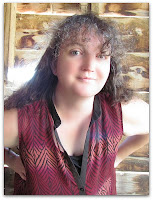 Johanna Harness: When I started on Twitter, there really wasn't a community of writers.  Agents had a lot of followers and there were pockets of authors who all knew each other, but it was difficult breaking into those groups.  I wanted a place where all were welcome, a place where it would be okay to jump into a conversation.  Twitter is a great medium for showing daily life. There is comfort in knowing that writing is frustrating and difficult and just a hell of a lot of work. Most writers have other gigs in their lives and still make time for words.  Just because the writing journey is difficult, that doesn't mean you're doing anything wrong.  Twitter shows that the real writing path is not magical.  It's wonderful some days and some days it makes your head explode.  That's normal.  I wanted a community on twitter where people would not feel so alone with that daily reality.

Kristen Lamb: Actually what inspired me to write WANA was that I saw a bunch of technology and marketing experts giving writers what I felt was flawed advice. They were well-meaning, but clearly didn't understand that writers are not car insurance and books are not tacos. Traditional marketing has never sold books...ever. And using Facebook as a new way to spam people is a bad idea.

I saw how writers could come together and support each other and they weren't doing that, at least not in a meaningful way that had power to eventually drive book sales. There was no reason we couldn't be one big family, leaning on each other and helping each other. Books are not so cost-prohibitive that people can't buy more than one, so there really was no reason for rivalry.

2. Do you think it's possible for a writer to survive the digital age *without* reaching out to support and network with other writers?

Kristen Lamb: No. I think the Lone Wolf writer is a romantic anachronism. Hemingway wouldn't last a minute in the new paradigm.

3. Conversely, do you think it's possible for a writer NOT to feel competitive with other writers?

Johanna Harness: Yes.  I think it has a lot to do with how a writer experiences validation.  If motivation and validation come from within, writers are much more likely to be supportive of each other.

Jealousy gets in the way of all kinds of relationships. If someone is jealous of my success and feels delight when I fail, that's not much of a friendship.  If that same person achieves great success and is only nice because she knows she's better than I am, that's no kind of friendship either.  I'm of a mind that we're all on individual paths.  We all struggle.  We're all working toward our goals. We can support each other and lift each other up and it doesn't diminish us.  Love inspires love. Jealousy inspires all sorts of nasty stuff.

4. Have you seen evidence of back-biting, invidious comparisons, put-downs and such on Twitter... without naming names? :) Or is it pretty rare?

Johanna Harness: Writers are no different than any other group of humans. I see it.  I distance myself from it. Anyone whispering ill of others to me is likely whispering ill of me to others.  That's not the kind of energy I want in my life.

Kristen Lamb: I hate to say it, but the worst behavior and the most unprofessional behavior I have witnessed on Twitter actually came from agents. I have unfollowed literary agents who found it fun to hide behind a cutesy moniker and talk about writers like they were morons. They would whine that writers were unprofessional and then act like high school mean girls. I've seen less of that lately and that is good. I think many of them are realizing they need writers and that being unprofessional won't be tolerated.

The only bad behavior I have witnessed from writers is the spamming. But, in fairness, a lot of "experts" are teaching them that blitzing people about their books is being a responsible professional. So in this instance I can see how I writer would mean well, but come off wrong.

Agents mocking writers? There is no gray there. It's just wrong. But, again, I've seen less and less of that so that's a good sign.

5. Can you name some good examples of writers who give others hand-ups and help newbies, so I can give them shoutouts? :)

Johanna Harness: Recently the writers over at Beyond The Margins honored me with their Above and Beyond Award.  The best part of the experience has been getting to know the other nominees on the list.  I'd point you to that list for some really wonderful examples of community-builders.

Kristen Lamb: Anyone you meet in #MyWANA. Also any of the WANAlums #WANA711 #WANA1011 and #WANA112 (WANAlums are blogging classes of mine who have teamed up). Piper Bayard @PiperBayad, Jenny Hansen @jhansenwrites, Marcy Kennedy, Patrick Thunstorm... There are just too many to name.