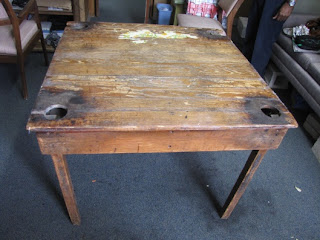 Old poker table  from early 1900s still resides in the back room of the small town pharmacy.


Repeatedly, other writers tell me “get to know your character, put them in the proper place and your story will emerge.”  I don’t think I appreciated this fully until I was working on about the fifth draft of my novel and while there were multiple chapters I had written and discarded, it was in these discarded pages that we became friends.  There was too much background material to include in the novel, but enough for me to get a clear picture of the people I had created and where they lived.  They become real in my mind as I began to place them with their everyday families and jobs.  I have to remind myself that, like Lake Wobegon, they are all fictional.


In developing a character and the place, there is usually something that starts my juices flowing…someone who always wears pink, or a particular meeting place where the locals all go.  Once you notice a quirk, it’s a lot easier to embellish and move forward. How did that quirk evolve?  How do other people respond to it?  It’s kind of fun watching people and places shape up.  I spend a lot of time doing research, although I pale next to the likes of Anne Clinard Barnhill, Nancy Bilyeau, and Sophie Perinot who have taken on topics in foreign countries centuries ago. The extent of their research is impressive. My research has been focused on more mundane things like flying an airplane, sitting around a fire house discussing fires(if there had been an alarm, they would have taken me with them), learning how to shoot a Colt 45, or going to a free range turkey farm to watch them slaughter turkeys.  My research is focused on a small town in Eastern North Carolina eighty years ago, and the most fun I’ve had is talking to older folks about the way it was when they were kids.


I’ve lived in small towns most of my life, so I’m familiar with the rhythm.  They’ve changed a lot, just in the past twenty years.  The economy has taken its toll on once thriving little businesses.  Every town had a handful of stores you could depend on. One of those stores used to be a pharmacy.  Another was a local restaurant.  Both of these places are where much of the action occurs in my novel.  While the local mom and pop diners haven’t yet become extinct, the small town pharmacies are getting hit pretty hard.  When you take into account the chain-drug outlets and recognize anyone can get their prescriptions filled at most grocery stores and then add the online Medcos and Express Scripts  there’s not much room left for Shuckers Local Pharmacy on the corner.  Pharmacists now stand behind mega counters shuffling pills and plugging in insurance codes while supervising a half dozen pharm techs.


When I started writing about a small town pharmacy operating in 1992, I remembered a place where people helped themselves to a cup of coffee out of the pot that sat on the counter and you spent the first ten minutes catching up on the family before the pharmacist got up to fill your prescription.  Twenty years isn’t that long ago.  Seems like yesterday to me, and yet when I realize how much has changed since then, I am astonished at what no longer is.  When I wanted to find out how it was in 1932, I talked to Billy.


Billy walked me through the years he worked as a soda jerk when he was in high school. The soda counter sat at the front of the pharmacy. Ice cream and milk shakes were the order for the after-school crowd.  Seltzer water with a spurt of cola syrup or lemonade made from a jug of sugar water and two or three squirts of hand squeezed lemon juice were other favorites. In the morning there was a checker game going in the front room.   Billy was responsible for having all the orders off the table in the back by 3 pm in preparation for the daily poker game.  The poker table (pictured above) had ash trays set in each corner of the table for the cigarettes which kept the back room in a smoky haze that wafted into the front area of the store. A lot of those cigarettes didn’t make it into the ash trays as the game got hot, as evidenced by the circles of wood burns.


Certain customers were known to have their favorite drinks waiting.  A teaspoon of bromine in a coke could settle-your-nerves, and a squirt of ammonia in a coke was used for a pick-me-up.  The first sales of Coca-Cola began in a pharmacy, Jacob’s Pharmacy in Atlanta, on May 8, 1886, with an estimated nine milligrams of cocaine per glass.  It was claimed to cure everything from headaches, heartburn, and depression to impotence.  The cocaine was removed in 1903 when the Stephan Company in Maywood, NJ, started using a cocaine-free coca leaf extract.  To this day it remains the only manufacturing company authorized by the Federal Government to import and process the coca plant.


The particular pharmacy I knew in 1992 isn’t there anymore.  The owner died.  People either mail order their prescriptions or pick them up at a Wal-Mart thirty miles away.  A couple of independent pharmacies still hang-on in adjacent towns, and yet Americans are buying more drugs than ever before in our history.  Still, I write about how things were, (not so very long ago, really) not so much because I want to return to those days, but because some things are worth remembering.  The local pharmacy “where everyone knew your name,” is one of them.  As one grandchild asked, “Grandma, how did you get on the internet before computers?”  Come sit down, child, and let me read you a book.  Let the book tell the story.
Posted by Brenda Remmes at 8:39 AM