Confessions of an Anxious Novelist

I stood in the wings of the theater stage, hidden in the folds of the heavy gold curtains, and stared at the set bathed in a brilliant explosion of light.  There was an archway—a metal trellis topped with fancy curlicues by the set designer—and beyond that there was a doorway which led to a drawing room with a fainting couch, a desk, and a wingback chair.  In less than a minute, I would hear my cue and walk boldly out from the folds of the curtains, pass through the arch, knock on the door, then enter the drawing room where, if my tongue didn’t fail me, I would speak my first lines.


I was 18 years old, a sophomore majoring in theater at the University of Wyoming, and this was my first starring role in a play—Captain Jack Absolute in Richard Brinsley Sheridan’s 18th-century comedy of manners The Rivals (a play which is now famous for giving us the word “malapropism”).  I was dressed in a cherry-red frock coat, a sword was strapped to my side, and my face was coated with Tan No. 1 pancake makeup.  Little creeks of sweat had eroded lines down my face.  I could feel my heart thudding somewhere in the neighborhood of my esophagus.  My head was filled with air and seemed to float above my body, tethered only by the tendons of my neck.


I couldn’t see the audience beyond the blinding corona of lights, but I knew they were out there. I could hear them rustling their programs, whispering to each other, fidgeting with their evening clothes.  They were waiting for me.  They breathed like foxes outside a rabbit’s hole.


At that moment, I wanted to die.  I prayed for the proverbial trap door to open beneath my feet and plummet me down to insignificance.  I wanted to turn and walk away from the brightly-lit stage, strip off my frock coat, dash out into the frigid night air, rewind my life and pretend I wasn’t living the very dream for which I’d been waiting.


For God’s sake, this was my big break: a starring role in the Theater Department’s major production of the season.  I’d auditioned for the role, beat out several other theater students, grabbed the brass ring.  I’d gotten what I wanted.  Why would I not want to step out onto the stage and walk through that door into the drawing room?  Why would I not revel in this dream fulfilled?
*      *     *


Last week, I got an email from a Facebook friend: “Look what just arrived in the mail!!!”  Attached to the email was a photo of my exclamatory friend holding up a copy of Fobbit, freshly unboxed from Amazon.  I wanted to die.


It’s not like I didn’t know this moment was coming—this day when my first novel would be gripped in the hand of a Real Reader®.  Of course I saw its approach, starting with the day last September when I opened the email from my agent and it was like a rainbow shot out of my computer screen and a marching band started playing in the background: “Grove/Atlantic has made an offer…”  From that champagne-in-the-bloodstream moment until now, I’ve been preparing to officially step out from the curtains onto the stage as a Published Novelist.


I just thought I had an extra week to prepare for this moment.  The official publication date for Fobbit has always been September 4, but here we were three weeks before Labor Day and my Facebook page was suddenly populated with photos of happy readers unboxing their copies of my book.  Surprise!  Surprise!  Amazon decided to start shipping copies early.  I blew air kisses at all of my Facebook friends and expressed my thanks in the comments below those pictures, but what I was really thinking was, “OhMyGod, OhMyGod, I’m not ready!”


In truth, I will never be ready.  I will never be prepared for the waves of attention to crash over me, for the spotlight to swivel and burn bright on my face, for the audience to rise to its feet and start applauding (with, I anticipate, a few “Boo!”s peppered throughout).  For you see, I am an anxiety-riddled creature with a complex problem.  I crave the attention, but I don’t know what to do with it once it’s given to me.


I can hear the chorus of unpublished authors right now: “What the hell’s his problem?  Doesn’t he know how good he’s got it?  I would run over my grandmother four times—up-and-back-and-up-and-back—just to have one iota of his good luck.”  You’re right.  This is a good problem to have and I am eternally grateful to my agent, to Grove/Atlantic, and to all the readers out there who have made it their mission to push Fobbit on friends and family.  I’m ever mindful that just a year ago, I was one of those unpublished authors grumbling about someone like me who complained about these kind of “problems.”


But the truth is, I’m still that shy 18-year-old who knows he must boldly walk out and deliver his lines to a waiting audience.  Somewhere along the way, I turned my stage fright into page fright.  I don’t think I’m alone in this.  I’m pretty sure I’m joined by a sizeable brethren and sisteren of anxious artists who simultaneously relish the spotlight and duck its penetrating beam.  These are our words on the page, the words we joined together, sentence by sentence, in holy matrimony. After all our hard work, we worry about their reception.  Will those words be loved by others?  Will they be misunderstood?  Will there be applause or catcalls?  And, most importantly, why am I spending so much time and energy agonizing over these questions?  After all, I’m published!  Hooray for that!  End of discussion.


But it’s not.  For every character we bring to life on the page, we fret he’ll be pierced by arrows from critics; for every sentence we compose, an equal amount of anxiety decomposes our self-confidence.  We feel our books deeply.  If you prick us, do we not bleed ink?  Maybe it’s just debut authors—or maybe it’s just me—but in the weeks leading up to publication it feels like there’s a Kitchenaid blender planted in our chests, gathering speed with each passing day, until everything inside us is a whirling, churning mess of ego, apprehension, joy, and second-guessing.  I’ve pretty much been useless to anyone else in my life for the past few weeks.  I’m self-consumed, tunnel-visioned, rigid with a paralysis of nerves.  I’ll be glad when the future is behind me.  I can’t wait to look back on this very essay and see it for what it is: the needlessly neurotic natterings of a novelist “living the dream.”  For now, though, there’s a writhing ball of snakes in my stomach.


In a month, I’ll head out on a cross-country tour to promote Fobbit and I’m sure it will all be fine.  By then, maybe I’ll have swallowed this knot in my throat and swatted all the butterflies in my stomach; maybe I’ll be bold as Captain Jack Absolute swaggering across the stage in his red frock coat; maybe I’ll hide the shake in my voice, the tremor in my hand as I sign copies of Fobbit.  But if you see me eyeing the exits, looking like I’m ready to bolt, I hope you’ll understand why.  And I also hope you’ll jump up to block those exits, barring me from leaving the room.  Because now there’s no turning back.  I’m stepping through that door, the one dividing Unpublished from Published.  For better or worse, I’m heading into the spotlight. 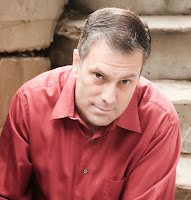 David Abrams is the author of Fobbit, a comedy about the Iraq War, which will be officially released by Grove/Atlantic on September 4.  Fobbit was selected as an Indie Next pick and for the Barnes & Noble Discover Great New Writers program.  His short stories have appeared in Esquire, Narrative, Salamander, The Connecticut Review, and several other publications.  He lives with his wife in Butte, Montana.
Posted by David Abrams at 7:39 AM