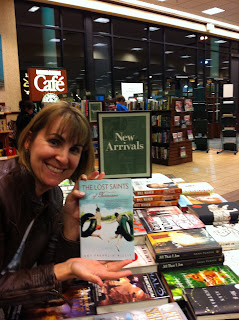 Twelve months ago I was an unpublished writer. My name hadn’t been in print since George W. Bush’s first term.

And then, magically, I could walk in bookstores and there it was.
The Lost Saints of Tennessee was published by Atlantic Monthly Press, a division of Grove/Atlantic, in hardcover in February 2012; the paperback is out this month. Despite the trend of letting debut books sink or swim on their own, my publisher consulted me on cover art, marketing strategy, and sent out a small truck’s worth of advance reading copies to reviewers and booksellers across the country. They had faith in my book. For a writer who spent eight years working on a novel with sparse amounts of encouragement along the way, it felt like an alternate reality.

And then things got really surreal a few months before the hardcover launch.

Grove’s director of publicity Deb Seager called me. “We’re thinking of hosting a media lunch for you and another author the next time you’re in New York.”

This was startling. First, no one and I mean NO ONE in publishing calls you—not your agent or your editor or your publicist—unless they view it as EXTREMELY IMPORTANT. Everything else is handled via email.

Second, it had never occurred to me, not even in my wildest self-aggrandizing fantasies, that anyone would throw me a “media lunch.” Sitting in deep conversation with Oprah? You bet. Talking with Terry Gross about how my little novel made its way to the #1 spot on the New York Times best sellers list? Of course. But lunching in a fashionable Manhattan restaurant with magazine and newspaper editors talking about my book? Uh, no.

And then I learned the identity of the other proposed lunch author. Grove/Atlantic is the American publisher for internationally renowned English author Jeanette Winterson—whose literary and film accolades include the Whitbread Prize and the Prix d'argent at the Cannes Film Festival, that Jeanette Winterson. Her memoir Why Be Happy When You Can Be Normal? was being published by Grove the month after Lost Saints. I had been a fan of Winterson’s work since my college days when I read Oranges Aren’t The Only Fruit, her semi-autobiographical first novel written when she was 23.

Panic mixed with a nerve-wracking blend of excitement and disbelief took hold.  What would I wear?  What would I say?  What if I froze up?  What if they hated me?  What if Jeanette Winterson was annoyed some no-name debut person was sharing her lunch?  But mainly, what would I wear?
From the dressing room of Macy’s, I texted pictures of myself in potential outfits to my elegant and always stylish author friend Christina Meldrum.  She gave the thumbs up to a green wrap dress and a fitted leather jacket.  I bought brown knee-high boots to match.  The lunch would be late September with a crisp hint of fall in the air.

As fate would have it, crisp did not show up but a gasp of late summer heat did. The morning of the lunch I climbed out of my hotel room bed and prayed the suspicious cold symptoms that had plagued me for weeks would go away; the following week I'd be diagnosed with walking pneumonia. I drank coffee with a Thera-Flu Daytime chaser. The temperature forced me to scrap the leather jacket.  I wanted to ditch the knee-high boots too but had no suitable alternatives. Make-up applied, particularly to the under- eye circles and reddish nose, hair coiffed, and I was off.

Before heading downtown, I teetered up to the Magnolia Bakery near Rockefeller Center to procure the lunch’s final course—two hummingbird cakes, each inscribed with the title of the books being featured.  Hummingbird cake is a Southern delicacy and my main character Ezekiel’s favorite cake.

I cabbed it to the Grove offices with my suitcase for the plane ride home and the massive Magnolia boxes in tow. Their offices are on Broadway, right next door to the Max Brenner Chocolate Restaurant and across the street from Strand Bookstore, in other words an ideal location for a publishing house.
By this point I didn’t yet know who was attending the lunch only that I’d have five minutes to talk before the meal.  I had practiced my spiel on the drive from Bucknell to NYC the day before. I lugged my belongings to Deb’s office. Her email pinged. Library Journal gave Lost Saints a starred review, our first official review. My anxiety downshifted.

I had no illusions the group was assembling for me. They were coming to see Ms. Winterson. And like Tom Cruise in Days of Thunder, I would happily draft behind her considerable star power.

The restaurant was four blocks from the office. I walked with Deb, Grove/Atlantic head Morgan Entrekin and my editor Elisabeth Schmitz. It was a LONG walk in humid seventy-five degree temperatures while wearing a dress of a non-natural fabric and boots. We were the first to arrive at Ciano.

I immediately disappeared in to the downstairs bathroom where I spent five minutes psyching myself up-- I will not vomit. I will be charming. I will not sweat. I will not spill food on myself. I will not drink wine. Okay, one glass. I’ve been waiting for this moment my whole writing life.

Our party was in the private room upstairs. I joined the Grove people and saw that no one else had arrived yet except for a petite woman with curly red hair standing by a table with a book in her hands. My book.

Before my brain could even begin to process who this person was, she walked over to me. “You must be Amy. I’ve started your book and I really, really like it. Would you mind signing it for me?” said Jeanette Winterson.

As if the heat and the extreme nervousness of facing NEW YORK LITERARY PEOPLE were not enough, this, this was too much. I looked at Ms. Winterson with my mouth hanging slack. A beat passed. Then another. She gave me an encouraging look.

I finally managed, “I’m not sure where to sign it.” At that point, I had never signed a single book. Not one. To anyone. She kindly pointed me towards the title page and then told an amusing anecdote about where one was supposed to sign and how some people were just going to go sell the thing on eBay.

Here is what I wrote: To Jeanette, From a great admirer of your work.  XO Amy Franklin-Willis. Yep.  I put x’s & o’s on my inscription to one of the great literary treasures of our time. Oy.

For the entrée course I sat next to the Vogue books editor. A reader of Vogue since my teenage days, I was a bit intimidated but I mustered up the following ice-breaker: “Your friends must never want to go places with you because they feel such fashion pressure."

There was nowhere to go but up. I somehow managed to stand in front of the assembled crowd and say something about my book without stuttering or spewing spittle. Ms. Winterson, of course, put everyone at ease and made them laugh in her remarks. Note to self:  always use “f” word and say it with an endearing British accent.

My shining moment arrived at dessert. I whipped out the Magnolia cake boxes and told the story of hummingbird cake and how my great Aunt Beth made one when I was a little girl and the scale of the layers astounded me. Most of the crowd had never had it before and a pleasant ripple of sophisticated anticipation manifested.

I finally relaxed. Baked goods I could talk about until the cows came home. I sat next to the People editor and we traded working mom stories. I made the editor fellow from Newsday laugh.

Then, poof, it was over.

Morgan and Elisabeth were thrilled to have learned that Vogue planned to excerpt Ms. Winteron’s book in the magazine. They flanked her and her agent on the walk back to the office. I trailed behind them, feeling exhausted and just the tiniest bit like the girl no one picks at a middle school dance. Deb kindly kept me company.

The office buzzed with the arrival of Ms. Winterson. I ran into Elisabeth. Well, more accurately we both happened to be in the ladies room at the same time. She said some parting words through the stall before rushing back to her office where discussions about the gorgeous new covers they’d commissioned for Ms. Winterson’s backlist ensued.

I boarded the Virgin America flight back to San Francisco feeling one part author rock star, one part hopeless beginner author, and one part extreme gratitude that my publisher cared enough to put me in the same room with a literary star.

Amy is better at casual lunch conversation now.  Her debut novel is out in paperback Feb. 12th, 2013. The Lost Saints of Tennessee is an Indie Next Selection and Vanity Fair Hot Type pick. Visit her at www.amyfranklin-willis.com