Ten Words to Make You Sound Smart at a Book Party

As a budding author, you may soon find yourself wearing a sassy outfit, holding a glass of champagne, smelling the way Thierry Mugler wants  you to smell, and standing in a room full of book people. You are clearly engaged in what can only be described as a party. There are drinks, there is food, people are milling around chatting, and the lights are low. However, in your debut author brain, what's going on is more like the GRE, combined with a firing squad, and also a graduation, where everyone is examining you to see if you look different, know your stuff, and deserve not to be shot.

Will you be a good author? Will you measure up? After all, you've possibly just spent a significant amount of time mostly alone, sweating over your novel, maybe even changing diapers, maybe even driving a minivan. How will you be able to converse with these elites, who eat, drink, and live books?

Here are ten words to stock your conversational arsenal that will make you sound like you just spent six years in a PhD program reading Derrida and Joyce and drinking absinthe. Warning: With the wrong audience, you might end up punched in the face or wearing your underwear outside your pants involuntarily. Use at your discretion.

1. Hegemony: This word describes a stronger group inflicting its self-serving ideas on a weaker group, while making the weaker group believe these ideas are awesome. Hegemony is pretty much a cuss word, for book nuts. Example: "This is a total hegemony, man!"

2. Proust: Proust is a fiction writer, and gay, and French, and dead. Those are the facts you need. His most famous work was over 3000 pages long. It's about the nature of memory and art, and no one except his mother has ever read it all. You can say it contains whatever character or plot twist you wish, and never be contradicted.

3. Deconstructionism: Contrary to popular use in reality television shows about fashion and cooking, "deconstruct" does not mean the opposite of construct. It actually means to reduce a written work to its most basic assumptions and then show how those assumptions are paradoxical and therefore meaningless. Instead of good vs. evil, it's neither. This is not a synonym for "analyze." Sorry, Sean Hannity. Sorry, Top Chef! 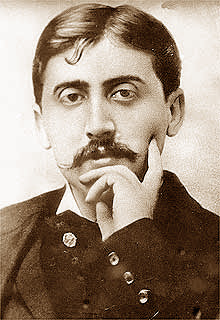 Marcel Proust is scintillated by your discourse.

4. Hermeneutics: This word means the study of ways to find meaning in a text. There are a million ways to go about finding meaning, all predicated on the idea that it can be found. Believe it or not, there are people who believe that hermeneutics and meaning are stupid and boring. For serious rockstar points, publically discard hermaneutics and everything it implies.

5. Post-colonialism: At some point in the 20th century, the world decided that making colonies was bad. We also decided that reading any native literature from a colonized country as "cute" and saying "It's neat how they keep writing things down!" was also bad. So we had to develop a new term for our new enlightened way of interacting with this type of discourse. Post-colonialism means "after the colonizers decided the colonized might actually have something to say and stopped treating them like a bunch of amusing dopes."

6. Foucault: Foucault is a philosopher, and gay, and French, and dead. He wrote in a very smartypants manner about a bunch of stuff, including how there is no truth or meaning, no way to interpret discourse. He was super-against hermeneutics. In fact, if you want to disagree with something that ends in -ic or -ism, you can probably cite Foucault.

7. French Feminism: French feminists invented the idea of a female kind of writing, "ecriture feminine" which is super-sexy and completely different from phallocentric male discourse. French feminists believed women should write about women, and their bodies. If you use the phrase "writing the body" you will get knowing nods from male friends and phone numbers from the girls.

You fail to convince Heidegger.

8. Joycean: James Joyce's catalog is varied and deep, which means that "Joycean" can go in front of any noun you want, including "Joycean monologue" and "Joycean symbolism" and "Joycean analogy" and even "Joycean discourse."

9. Heterogeneous: Heterogeneity is good because diversity is good. Therefore the word "homogeneous" is bad, just like hegemony is bad. Note: None of these words can be properly applied to milk. Just political movements, world populations, ideas, and granola.

10. Discourse: Use this word in place of any synonym for language. Any chunk of words, spoken or written, can be discourse. Do not ever, under any circumstances, call words "words" or sentences "sentences." Try "heterogenous discursive units." You may note that I've used the word "discourse" in this very article about 47 times, just trying to sound smart!

Ok, but let's set all that aside for a moment.

Because look: the reality that I've been discovering is that book parties are actually really just parties. Book people are not irritating snobs just waiting to trip you up if you haven't actually read that Thomas Hardy novel you just nodded your head about. They're mostly lovely, kind, interesting people who want the best for you and want you to continue writing books so they can read them.

When you're in this situation, try not to be a Debut Author talking to a Bookstore Owner or a Magazine Editor or an Established Author. Just be a person talking to a person. The more human your connection, the more natural and genuine you are, the more fun you'll have and the more you'll take away from the experience. And, by the way, the more impressive you'll be. Because ultimately nobody wants to meet the guy or girl who can really throw around the word dialectic like a rodeo lasso. They want to meet you.
Posted by Lydia Netzer at 8:46 AM