I went to a high school in suburban Michigan with a student body of greater population than some towns. We were three to a locker, packed tight in classrooms. It was hard not to feel lost in that sprawling, shining building, especially if, like me, you had zero interest in sports and the other pursuits of the popular crowd.
Years later and half a country away, BookExpo America (BEA), by its own definition "the largest publishing event in North America," brings back a little of that feeling.
But before I explain why, it’s important to make an attempt to explain what BEA is. And what it isn’t. Each year, for four days at the end of May or beginning of June, a major city hosts the largest book trade fair in the country. It’s been New York City's Jacob J. Javits Convention Center since 2009, a logical place for such a huge undertaking. The only other time I’ve been to Javits Center is for Comic Con, but it’s always got something going, from national dog and auto shows to volleyball tournaments.
When you make your way to the extreme west side of Manhattan and walk in the big doors of Javits to be part of BEA, it looks like this: 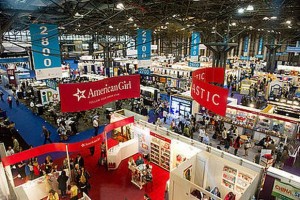 Who are all these thousands of people? Publishers, booksellers, agents, librarians, educators, bloggers, reporters.  You wouldn't know that amazon is omnipresent in the book business by walking this floor. Advanced Reader Copies (ARCs) are everywhere. It's all about paper!
You have, I am sure, noticed that there is one group I haven't included: authors. And that's because it's complicated. BEA is not for us; it is, in many ways, about us. Authors of new work sign everywhere, either ARCs or finished books. There are "author stages" for the big guns, such as Amy Tan being interviewed by the Oprah magazine books editor. An author breakfast featured Chelsea Handler, Ishmael Beah, Doris Kearns Goodwin, and Wally Lamb.
So how do authors get recruited for breakfasts and stages and panels? That's where BEA becomes oblique. This isn't a writer's conference, where you can volunteer to sign or submit an idea for a panel. I live in New York City and can show up at Javits, but it's not that simple.  The publishers arrange some things; the BEA higher-ups schedule other things. I get the feeling that many are called but few are chosen.
Yes, this is when the high school memory in, when cool-kid parties were going on, but I rarely was given the address. It didn't help that my first time at BEA, I was clueless. In 2011, my publisher, Touchstone, kindly gave me a badge and I wandered the vast, cacophonic floor during a Friday afternoon. It was seven months before my debut novel would be published; I had no ARCs to sign and it seemed the interesting panels had all taken place that morning. At one point, my feet aching, I sat down on the floor with a $10 pretzel and a conference map/brochure, dazed.
Two years later, it's BEA 2013, and my second novel, The Chalice, has been on sale less than three months. I have something to sign! But where--and how?
I'm not someone who gives other people much advice but I do have one tip to pass on to fellow authors: find a tribe. Back in high school, bored and alienated, I managed to discover like-minded students in the Drama Club and signed up, first painting sets and designing brochures and finally working my way up to performing onstage. I made quite the French maid in a performance of Eugene Ionesco's "The Bald Soprano," if I do say so myself.
Now, as an author, I've discovered the value of joining a different kind of tribe. My books are thrillers set in Tudor England--and so I've joined the Historical Novel Society, International Thriller Writers and Mystery Writers of America. At a meeting of MWA, a new friend, novelist Laura Joh Rowland (the Sano Ichiro mysteries), let me in on the inside scoop on BEA: if your publisher will give you a minimum of 50 books, you can sign them for a half-hour at a booth run by  MWA.
Sure enough, the regular MWA newsletter went out on email early this past spring, issuing a call for members to sign up for slots at BEA. I quickly checked in with the team at Touchstone; I was told yes, they could send over the books; and I emailed a request to MWA. A few weeks later, I had a slot late on Thursday afternoon. I was in!
My official BEA badge arrived in the mail, thanks to my publisher. I confess to a little shiver when I looked at my credentials. I am real. 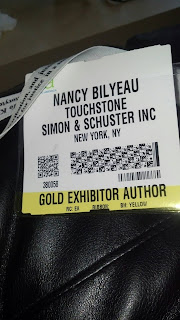 Ninety degree heat notwithstanding, I headed for the Javits Center last Thursday. One function BEA performs is a time for everyone to talk about The State of Book Publishing. I'd scanned the blogs and newspaper articles in the days leading up to the expo. Keith Kelly's Media Ink column in the New York Post struck a positive note: "Book Publishers Finally Get a Reason to Party." Among the party schedules and publishing house news releases, Kelly reported that, "Overall net revenue from trade publishing--the name used to describe books aimed at a consumer audience--increased 6.9 percent to $15 billion in 2012." Yes, $15 billion seems reason to pop a few bottles of champagne.
Javits was just as crowded as I remembered. This time I was struck by the Malcolm Gladwell poster/flag hanging near the entrance. It made Olympic flags look minuscule.  At the MWA booth, administrative director Margery Flax said hello with a big smile. I was to sign from 3:15 to 3:45 with two other authors: Hank Phillippi Ryan (The Other Woman) and Sara J. henry (A Cold and Lonely Place). Namecards were ready; water bottles were in the mini-fridge; our books were neatly stacked. When I remarked on how flawlessly organized the event was, Margery said, "Well, we've been doing this a while." 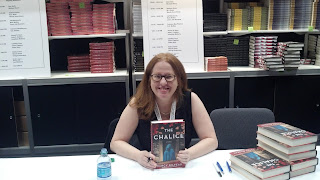 Best of all, there they were...the people who wanted our signed books. It was, to my delight, an actual line. I would say that 75 percent of those who stood in front of me were librarians. Some of them had read my first novel, The Crown, or had heard of it. Others knew nothing about me but liked the cover and were interested in learning something about my fiction. While signing the title page, I told them my "log line."
The half-hour was up in what seemed like five minutes. Shaking hands with Margery and the MWA volunteers, I left the booth and ventured to the Simon & Schuster area, chatting with my wonderful Touchstone publicist, Jessica Roth, and getting a chance to meet my publisher, Stacy Creamer, face to face.
No, I wasn't the star of BEA, on a level with the Malcolm Gladwells and Amy Tans. But for an hour or so, I felt like the most popular girl at school.

Posted by Nancy Bilyeau at 5:00 PM

Email ThisBlogThis!Share to TwitterShare to FacebookShare to Pinterest
Labels: Nancy