It's sitting there in a neat pile by my desk. My first novel, Shine Shine Shine, in glittering, glowing advance reader copies. The blurbs are in, the cover is designed, the thing has been revised fifty thousand times, and its pages contain everything I wanted to say about humanity, love, death, motherhood, and fear. Every word has been analyzed, moved, changed, tweaked, and every line is purposeful. And I like it.

It's sitting there in a file on my computer. My second novel, as yet untitled. It is a first draft, which means it hulks and skitters across the page. It is unfinished, which means I don't know all its secret agendas and devious little plans yet. It might change. It's full of stupidly repeated words. It's got place-holder dialogue and language, like "Describe the institute lobby here, fool, if you can." And I'm a little afraid of it.

In my imagination, the first book addresses the second:

"What's up, noob? Hey, you got some pie filling on your collar. Or is that self-indulgent interior monologue? Dang, you're going to need to revise that, honey!"

Smartypants first book is not very tolerant of the second book's growing pains. Like an older sibling that pokes a baby and says, "Can it play yet?" Really, I want to love them both. But the first book is just so charming. Second book looks monstrous in comparison.

If I were a potter this would be easy.

The first book is like a glazed, finished bowl. It's microwave-safe. Its motif is well defined. It's symmetrical. You can eat chili out of it and not die of lead poisoning. You can put it on your shelf and admire it. You can say to your neighbor: "I made that" and your neighbor will not back away in terror.

The second book is like a lump of clay you just dug up out of the yard. It has rocks in it, and streaks of dirt, and it's as symmetrical as a brain tumor, and if you tried to eat chili out of it... well, you would never try to do that. Because who eats chili out of a hideous lump of clay? Who would EVER want to do THAT?

"No one," whispers the first book. "Because it's just so hideous!"

The difficult second novel (or album). Is this really a thing? Oh yes, it's such a common problem that there are blogs and bands named after it. Stephen Fry explained it like this:

"The problem with a second novel is that it takes almost no time to write compared with a first novel. If I write my first novel in a month at the age of 23, and my second novel takes me two years, which have I written more quickly? The second of course. The first took 23 years, and contains all the experience, pain, stored-up artistry, anger, love, hope, comic invention and despair of that lifetime. The second is an act of professional writing. That is why it is so much more difficult."


Is that why it's so difficult? I'm not sure. Maybe there are other reasons. Here's my list:

1. It's always hard to draft. Writing through the drafting stage while the first novel is sitting there winking at you, fully edited and polished, takes a lot of fortitude. It's hard to remember your first book was once this difficult, that it once sat in tatters as you completely rearranged the timeline, that it used to be three main characters instead of one, that there was a really pretentious and unlikable stock trader in it, that it once had a line in it where one woman held the other woman's entire husband in her mouth, like a cat. It's hard to remember that the first novel used to be bad, used to be rough, used to be just like this.

2. The second novel sends you in a definite direction. The first novel is a point on a graph. The second novel is another point on the graph. But in between these points, something very significant is formed -- a vector. And the vector points to your future as a writer, and where your career will go. With one novel under your belt, and a second in the works, it feels like you could put the second point anywhere. 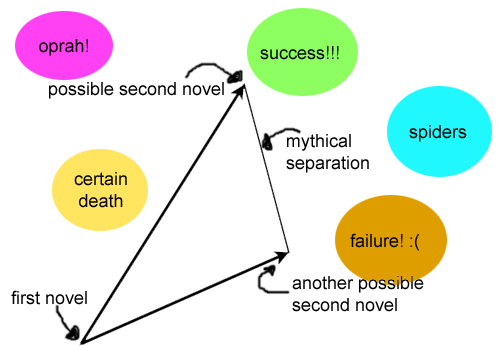 Darker, or lighter. More romantic, less. More literary, more commercial. More about cats, more about dogs. More hope, more despair. But ALL of those choices seem dangerous. If I write another book about artichokes, does that mean that all my future books must be about artichokes? Conversely if I write my second book about pears, will all the artichoke fanatics who bought my first book be disappointed and upset? Or is elliptical produce too limiting entirely -- maybe my second book should be about wristwatches.

3. There's not a lot of time to focus on it. This is why kid #1 gets a baby book elaborately filled in and packed with keepsakes. Kid #2 gets a "firsts" journal maybe, and by the time you get to kid #4, he's lucky to show up as a blur in the background of an aunt's snapshot.

4. You feel like you've already said everything. We writers are not in the business of holding back. We put it all out there, as much as we can, in every single chapter, and we don't save back reserves to get us through next year, when there is a long, wide feasting table to be piled with everything in the pantry, right now. At least I don't. So when I had finally finished the eleventeenth revision of Shine Shine Shine, I felt that not only was I done with it, but that I was done with saying things in general, because everything I wanted to say was in that book. Everything important to me was represented. It felt complete.

Of course, that was dumb. Of course I have more to say. There are huge stones yet to turn over and an entire weird universe of questions to pry open. Now that I'm locked into wrestling with my new book, I'm urgent about its new ideas. As for not having a lot of time, hey, kid #2 might not get the elaborate baby book that #1 is so proud of, but kid #2 is going to get all the benefit of my "first time" experience. I'm a better writer now than I was when I started. That helps! And yes, my second novel will send me in a direction. But the reality is that I was already going in a direction. The second book is as inevitable as one breath follows the next, and the idea that I could set that second point down anywhere on the graph -- that is actually the illusion. I'm going to write the book I have to write, and do the best job I can, and what comes out will set a vector, yes. But that vector was pre-determined by the mess in my brain, not by some decision I think I've made to send myself down this or that career path.

Which brings us back to the act of drafting. The act of sticking one's hands into the lump of clay, while the glazed and finished bowl sits gleaming on the shelf (full of chili, I hope). And that, my friends, is just going to be hard. But fortunately, I'm in it up to my elbows, and my characters have grabbed me by the throat, and I'm not washing my hands until this thing looks like a plate. See you in the kiln!
Posted by Lydia Netzer at 8:50 AM