Evolution of a Book Cover


As other authors here have noted, the actual production of a book can be no less stressful than the writing. From choosing a font to finding blurbs, there are dozens of Is to be dotted and Ts to be crossed.

But one of the most fascinating is the question of what kind of cover to put on the book. You want one that not only captures both the spirit of the book and the readers eye. It has to tie the book to others in its genre, while at the same time signaling its distinctiveness. It is also a decision that few authors can really control. (Check your contract!) 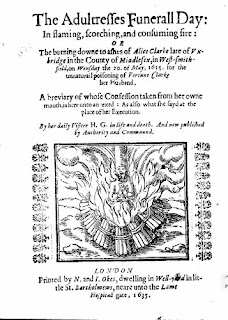 When I imagined the cover of The Midwife’s Tale, I wanted it to look like a seventeenth-century murder pamphlet like the one on the right.

The pamphlet would both capture my setting and the central tension of the book, whether a woman would be burned at the stake. To add a little color, I imagined foil overlay in red and orange to make the flames really leap off the page.

Except that sometimes I'm not very bright, and I didn't tell anyone about my idea. So, lesson number one: if you want something, say so.

In any event over the summer - about seven months before my due-date -  my editor sent me this cover: 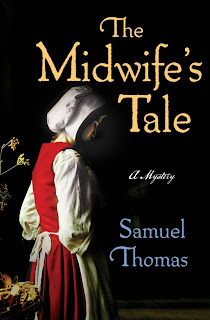 I was utterly floored. I loved the interplay of darkness and light, the color scheme, the way the light played across the figure’s back… nearly everything about it.

The one concern my agent (not to mention fellow Book Pregnant authors!) had was that it seemed a bit too still.

I had written a murder story, after all, and we thought it could use a bit more danger. I also suggested replacing the stalks of grain on the table with a mortar and pestle so the midwifery piece was more prominent.

This is where Minotaur came through for me the first time. By all rights, they could have said, “Nope, this is it.” But they didn’t. They came back with a modified cover. 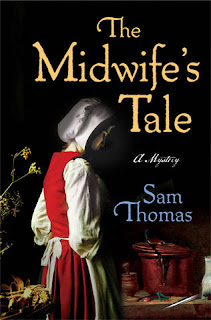 If you look closely, we’ve got a mortar and pestle, and (even better) a knife, but now the scene is dominated by the cooking pot.

So we tried again, and once again Minotaur came through gorgeously. We found an image we liked, and then the art department integrated it with the figure in a way that (I hope you'll agree) is nothing short of incredible. 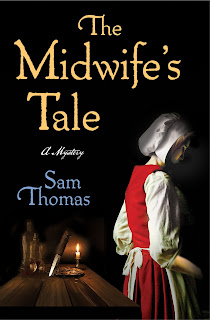 We’ve got a knife (but now it's more menacing) a glass tipped on its side (which also fits with the plot), and even a right arm! I know all parents think their babies are beautiful, but mine really is.

I suppose the moral of the story is that you only get one cover (unless they give you a second one for your paperback!), and you need to find one that you love.

I can’t say enough good things about my agent (Josh Getzler) and editor (Charlie Spicer), as well as the artists at Minotaur/St. Martins,  who put up with my requests that we keep trying. I’m certainly happy, and I hope that they are as well.

Sam Thomas is the author of The Midwife's Tale: A Mystery, which will be published by Minotaur/St. Martins on January 8, 2013. (You can preorder it from Amazon or Mac's Backs. Order from Mac's, and the book will be signed by the author.)

To learn more about the history of midwifery and the real-life midwife behind his protagonist, visit his website at: http://www.samthomasbooks.com. You can also find (and like) him on Facebook at: https://www.facebook.com/SThomasBooks
Posted by Sam Thomas at 3:00 AM